Verge is a cryptocurrency focused on privacy. Transactions on Verge's blockchain cannot be tracked or traced. In this talk, we'll take a closer look at what Verge is and what technology it uses.

You can buy Verge from this link: go to bitvavo

What is Verge and how does it work?

Verge (XVG) is a cryptocurrency that focuses on total anonymity and privacy for its users. Where Bitcoin succeeded in creating a decentralized cryptocurrency, Verge takes it further by making transactions completely anonymous. The currency is virtually untraceable and Verge users can instantly transact anonymously with each other.

How this is possible? Verge implements highly advanced blockchain technology built on top of services such as Tor and I2P that hide your personal information such as IP addresses and geolocation† With the future implementation of RSK technology Verge will provide smart contract functionality while maintaining total user confidentiality, making it the only cryptocurrency on the market to combine such features.

Why not just use a VPN?

While communicating via Virtual Private Network (VPN), the only encrypted portion of the connection is yours to the VPN provider. From that moment on, the communication remains unprotected. So the VPN service requires trust that your provider does not release any information, logs and records about your activities. With Verge, the user does not have to rely on a third party.

The Verge Currency is a one hundred percent open source project and The Verge Community has full input and inclusion in all decisions made regarding new feature implementations. Verge is a grassroots style project with a development team constantly working to improve the existing foundation of XVG. No ICO was held at launch and no pre-mining took place.

There are many cryptocurrencies out there and they are often very similar. This is what makes Verge so special:

What is the Wraith Protocol?

The term has been used a few times in this article, but what exactly is the Wraith Protocol? Before we can answer this question, it is important to understand the basic concept of a ledger.

Basic concept of a ledger

In simple terms, a blockchain ledger is similar to a database in which all transactions are recorded. In case of Bitcoin the ledger is public, which means that all transactions can be viewed openly and linked to your public address via the blockchain explorer. Alternatively, ledgers can also be private, where transaction details are hidden and cannot be viewed.

Until now, both types of ledgers were mutually exclusive, for example, they could not coexist on the same blockchain. What does this mean for the user? In practice, a specific cryptocurrency depending on the application and task at hand. In other words, the user is faced with a trade-off between transparency that a ledger provides and anonymity with a private ledger.

One might rightly ask: why compromise between privacy and transparency? Wouldn't it be easier to run both ledgers on the same blockchain so that the user doesn't have to switch back and forth between the existing solutions?

Wraith Protocol solves this problem by giving you the freedom of choice.

Wraith Protocol is a technology that allows the user to seamlessly switch between public and private ledgers on the Verge blockchain. For the first time, users can now choose which ledger they want to use.

To break it down, when Wraith Protocol is enabled – the transaction details are hidden and not visible through the blockchain explorer. In a circumstance where transparency is required, the Wraith protocol is disabled so that the transaction data is visible in the ledger.

In addition, Verge offers total IP obfuscation in both cases, thanks to the most advanced version of TOR integrated into the core wallet. Combined with Wraith Protocol, it makes Verge the only truly untraceable cryptocurrency.

How does Wraith Protocol work in practice? When the user initiates a transaction with the core wallet, the switch is set to “ON” and the private ledger is used. Set this to OFF and the ledger is active. The process is illustrated below: 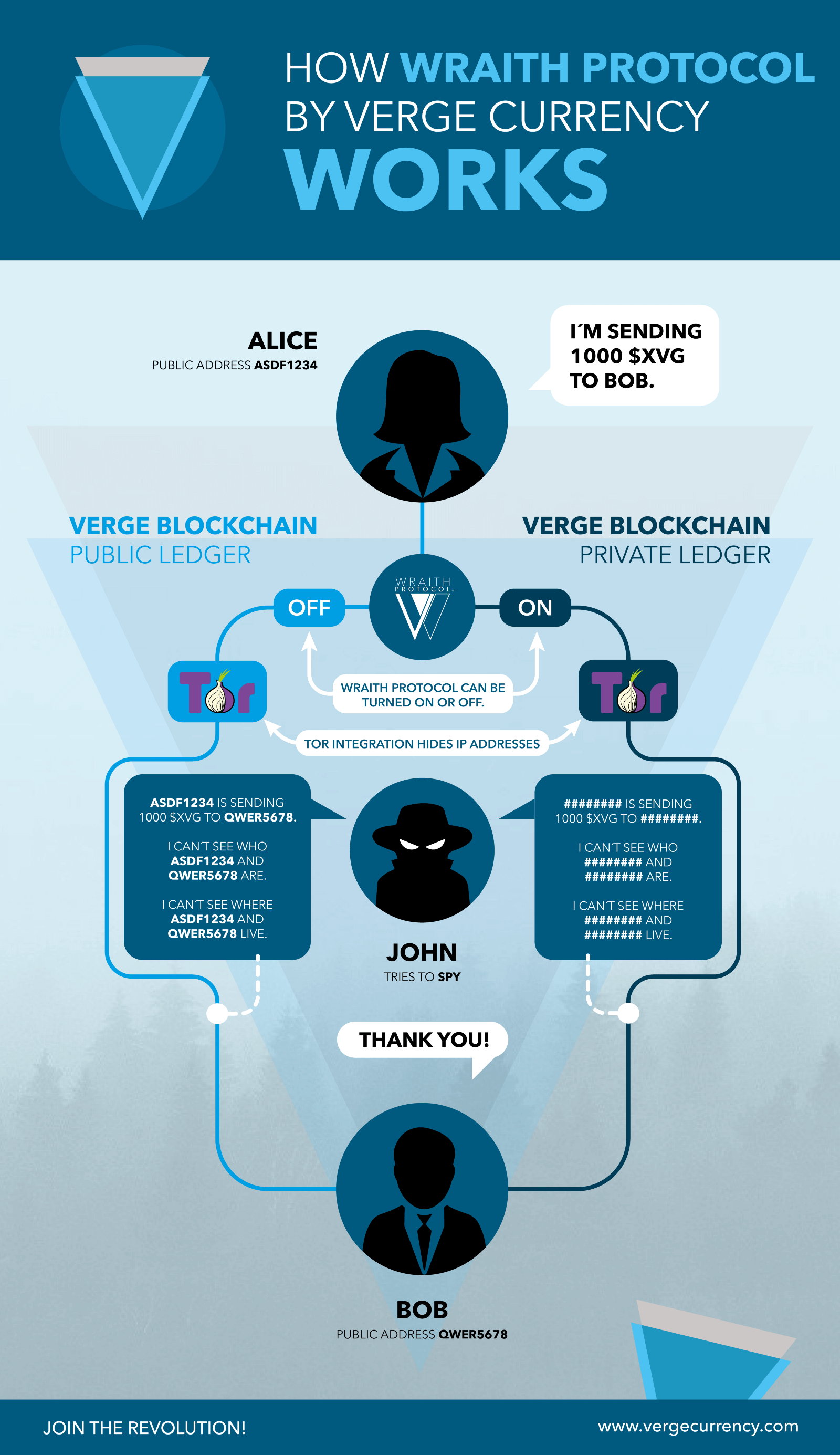 What does it mean for the future of Verge?

When transparency is essential, a ledger offers the solution. These cases include salespeople, billing customers for daily purchases, preferring an observable ledger for accounting purposes, etc.

On the other hand, a private ledger also serves its purpose. First of all, privacy is a fundamental human right and has intrinsic value in itself. Second, a private ledger can be used for commercial purposes, such as conducting business transactions and handling sensitive information. Think of an entrepreneur who wants to keep part of his activity unseen by competitors in order to stay ahead. Another example is an NGO operating in a hostile political environment and receiving confidential financial support.

'Bitcoin is great, but if 'it's not private, it's not safe'

The implementation of BIP65 on the Verge blockchain makes it possible to exchange Verge Currency via Atomic Swaps, eliminating trusted third parties. Finally, to provide an additional level of security, this update also provides a two-way encrypted p2p chat feature in the main wallet, protecting the end user from survey methods such as stylometry. We call it Visp.